Only two banners have been used by Scarsdale Lodge that we know of. The first or ‘old banner’ as it has become known was presented to the Lodge by Bro. Rodes (without an ‘h’) of Barlborough Hall in 1826. As the history shows, the Lodge went through a number of changes resulting in a change in the Lodge number.  The Scarsdale Banner bears the number 981 – which was changed to 681.

The banner is painted on silk and is recorded to have last been used ceremonially in 1920. Latterly, it has been mounted in a display case behind the Master’s chair in the temple.

Below the Arms, elaborate tracery delineates the Scarsdale Lodge and its number 981, together with the motto of Grand Lodge.

The late W.Bro. F. J. Rooth thought it originally hung free on the wall.  Until the late 1940s/early 1950s it was taken to Provincial Meetings at Derby, after which it became too fragile and was permanently mounted in a case.

The display case which housed the banner was accidentally damaged in 1999 and it was decided that it would be wise to have the banner removed and inspected with a view to restoration. W. Bro H. Husband carried out some research, and as a result the Textile Conservation Centre at the University of Southampton was contacted as they are the leading authority in this area.

On inspection by the Textile Conservation Centre their report showed the banner had been backed before mounting, but this was not part of the original banner. Further, it was found that it had been coated with a form of varnish which at room temperature had become tacky. Both the backing fabric and varnish had to be removed to restore and save the banner from further damage.

A full account of the restoration that has taken place is available from the Lodge upon request via the secretary. At the advice of the Textile Conservation Centre a museum quality case was commissioned to house the restored banner and under their instruction the banner was duly mounted in the case and re-hung in the temple behind the Masters Chair once more. 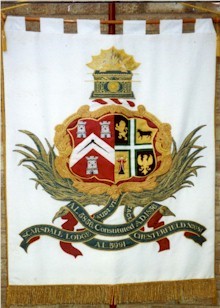 Scarsdale Lodge No. 681 is amongst the oldest Lodges in the Province of Derbyshire and found itself unable to muster its banner at the 200th Anniversary meeting of Provincial Grand Lodge in March 1989.

Thought was given to the possibility of replacing the Old Banner, despite the lack of working plans and even descriptions and due enquiry was made.

Faced with the problem of replacing an ancient banner, fragile in state, indeterminate of colouring and possibly incapable of being lifted from its hanging, it was decided to have recourse to photography.

Another P.M. proposed that a replacement banner should be made. Mrs Priest took tracings from the old banner within the lodge room and materials were obtained from specialist agencies in London. Working from June 1991 to March 1992 hundreds of hours of hand embroidery were undertaken by Mrs Priest. The resulting elements, which included gold wire work and appliqué, were worked on a cream background giving an almost identical size to that of the old banner.

The opportunity was taken to include the Banner in the Lodge’s representation at the Annual Meeting of the Provincial Grand Lodge of Derbyshire on 11th April 1992. On this occasion it was borne in procession by W.Bro. H. Husband, the P.M. who had overseen the project since its inception.

Following the Lodge meeting on 14th April, 1992 the Brethren were joined by their ladies and a special invitation was extended to Mrs Priest and to Mrs Margaret Adlen.  The Worshipful Master, Bro. Keith Pollard, was pleased to congratulate Mrs Priest and offer her the Lodge’s grateful thanks for the excellence of her work on the Banner. The attention to detail and overall competence of the work, evident from close appraisal of the Banner, won admiration from all.  The one regret was that Bro. Ron Adlen, P.M., had unfortunately not lived to see the Banner’s completion.

Dedication of the Replacement Banner by the Provincial Grand Master was arranged to  take place at the Regular Meeting of Scarsdale Lodge No. 681 on Tuesday, 15th September, 1992.

When not on Ceremonial use the new banner is hung in its display case in the Blue Room adjacent to the temple.